I’ll totally honest: Jim and I are NOT spontaneous.

Throughout the (almost) fifteen years we’ve been married, we have had many adventures, but they are always well-planned. We travel frequently, but always after doing our research. We are creatures of habit. We like to eat at a certain time, we go to bed at a reasonable hour, and we never leave town on a whim. So, when my aunt called on Tuesday to let me know she had two tickets she couldn’t use for the Phillies/Diamondbacks game the next evening, I wasn’t hopeful that I could convince Jim to travel the 2.5 hours to Philadelphia on a work night.

To my surprise, his response was: “You know, I think we could do that.”

So, as soon as he got home from work yesterday, we kissed the kids, hopped in the car, and headed to Citizens Bank Park. The weather was beautiful, but the traffic was terrible, and we pulled into the parking lot as National Anthem was being sung. After wandering the stadium looking for dinner and the perfect beer, we made our way to our seats.

Despite being in the top tier, they were really excellent seats. We could clearly see the ball go over the plate. The Jumbotron was right in front of us and the Philadelphia skyline hovered over left field. The weather was gorgeous and not to hot or cold. All the fans sitting around us were lovely.

Unfortunately, the Phillies lost 2-0, and we only got to watch Bryce Harper bat once as a pinch hitter because he was on rest in preparation for their important upcoming series with Atlanta. It figures: he has started all 68 games of this season and the one we go to is the one he doesn’t play. Still, the crowd reaction when he stepped out of the dugout to bat for pitcher Zach Elfin in the bottom of the 8th inning was electrifying. 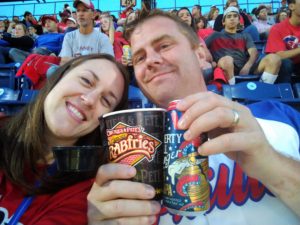 The drive home was late and my eyes were exhausted from staring at a dark, empty turnpike for hours, but the trip was well worth it. Jim, who napped lightly as I drove home, still managed to get up and get to work on time this morning.

As we pulled into the driveway in the middle of the night, Jim said, “That was a fun trip. I would almost do it again.” Perhaps more spontaneity is in our near future after all.