In November of 2004, 3 months into our marriage, Jim and I took the next obvious step: we got a dog. 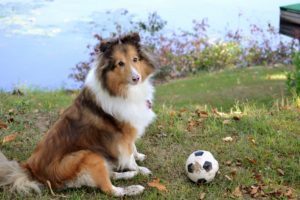 I wanted a Sheltie (Shetland Sheepdog) because I had one growing up and she was super smart and fluffy. We saw an ad for a litter in the paper, so we called and headed to the breeder to see the puppies. We were so naïve. Looking back, there’s so much we should’ve done. We didn’t ask to see the parent dog. We never asked to see where the dogs were kept. We didn’t know to ask how many litters the mother had or how recently she had her last litter. We waited in the breeder’s laundry room while she brought the last female sheltie pup.

The breeder set the 12-week-old puppy down on the laundry room floor and I immediately scooped her up. She smelled like barn. She was soft and alert and not afraid of me at all. I looked at Jim and asked, “can I keep her?” and she turned her head to look at him, anxiously awaiting his response. I’m not sure why I even asked, because I knew he was already thinking of names in his head. She headed home with us that afternoon and we named her “Sophie.”

When we got home and put her on the kitchen floor, she immediately ran to our glass-faced dishwasher, whining and pawing at its surface. She ran from side to side, trying to squeeze in the cracks between the dishwasher and cupboards. Perplexed at first, we realized she was looking at her reflection, not realizing it was her own image looking back at her and not her brother, the only pup left at the breeder’s.

After an adjustment period, she settled in nicely. Jim did most of the training and she was a quick study. Before long, she could sit, stay, shake, and play a mean game of catch. She barked like crazy, which is a trait of her breed, but otherwise she was the perfect pup. She travelled with us and we brought along a doggie travel bag. It’s fortunate we didn’t have social media at the time, because we would have embarrassed ourselves with constant posts of our puppy love. 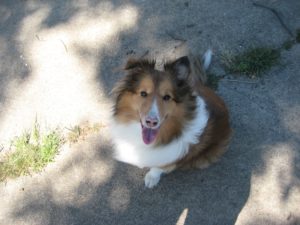 It was just past her first birthday that her first back knee went out. It was terribly painful to watch and we quickly paid out the $1200 for surgery to correct the birth defect known as a patellar luxation. A year later, the other knee went out and we coughed up the money again. In her recovery, she depended too much on her front legs and developed arthritis in those. She also favored one side as she lay on the floor, causing her spine to curve. As a result, she would walk with a crooked, limpy gait for the rest of her life.

When she approached 8 years old, the age at which my first Sheltie had passed, we began to prepare for the end. She had been crippled for most of her life, how much longer could she last? Still, she played a slow game of fetch at every opportunity. The months passed by, and then the years. Every few months we would say, “I think it may be almost time,” then she would rebound with a renewed zest for life. Before we knew it, she was fourteen. 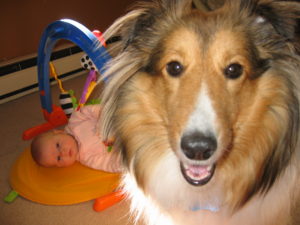 The past few months, however, things began to get gradually worse. Walking was the least of her problems. First, her eyesight began to blur, then her hearing began to go. The condition of her teeth required soft meals and her smell turned sour. Despite all her maladies, she was still alert and gregarious, barking at our young Australian Shepherd as she played catch and longing to join in but happy to cheer from the sidelines. 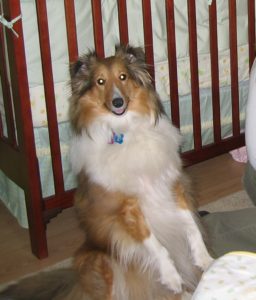 Finally, this past week, it was time to say good-bye. Fourteen-and-a-half years – practically our entire marriage – she had been our baby. But it was time.

Everyone is sad, but we are also relieved that she is no longer suffering and grateful for the many memories she gave us: 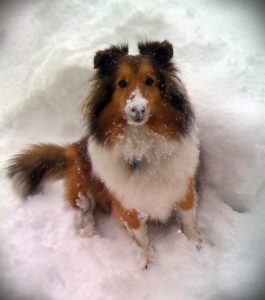 When you get a pet, you know that one day you will have to say goodbye. While the goodbye is terrible, it certainly doesn’t outweigh the joy that comes before.

We miss you Sophie! Thank you for all the joy you brought to our lives.

10 thoughts on “Saying Goodbye to Sophie”