March must be the golden month for our marriage, because two of our three children were born in December. Not only that, but their birthdays are only 1 day apart. On top of that, Jim’s birthday is also the same week! Add to that two of my grandparents and one brother-in-law and our entire December is filled with birthdays. Oh, yeah, and also Christmas.

For now, both littles are happy with sharing a birthday party, as long as cake, presents, and all their favorite friends and family are involved. To individualize their celebrations just a little, each of them also gets to choose a restaurant in our area to go to on their actual birthday.

This year, 4yo (in all her fanciness) chose Wendy’s. 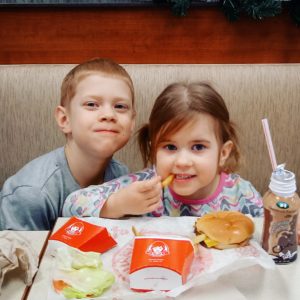 7yo decided to go slightly higher-end and selected a local restaurant that he thought sounded fancy because it had the word “hotel” in its name. Unfortunately, they weren’t open for lunch, so instead he chose a local brewery that he knows we go to for trivia. He’s never been to either place before, but he wanted to go somewhere that felt “grown-up.” 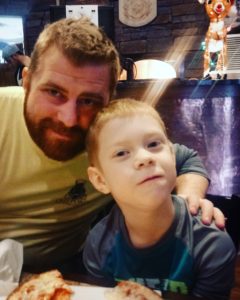 In a few years, I imagine their birthdays will look more like their older sister’s: sleep-overs, going to the movie with friends, and disappearing to the basement to avoid adult interaction. For now, we we are still enjoying getting to spend every moment of their birthday celebrations with them.