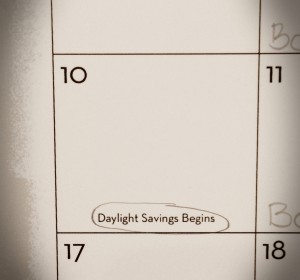 I love Daylight savings time when it’s in the fall.  It used to fall on the weekend of my birthday, which was extra awesome.  Now, it falls a week later and (despite it probably being on someone else’s birthday) it’s less awesome, but still wonderful.   I cannot count the times I’ve said “I could really used another hour or two in a day” and once a year the calendar gods smile down upon me and say “here you go.”  Of course, I usually waste it watching TV or playing games on my phone, but still – it’s an extra hour!

Alas, there must always be balance in the universe so, four months later, that extra hour gets yanked away from me.  Right in the middle of what is likely the most depressing time of the year in Pennsylvania, when everything is gray and bleak and you still need your winter coat, the calendar gods say “Ha! You thought you finally got your kids onto a great sleeping schedule.  Well, try this on for size.”  The following five to seven days then become the longest week of rough mornings in the entire year.  Imagine 6-year-olds who normally have to wake up by 6am on most days suddenly having to wake up at 5am instead, while their bodies are set to go to sleep at 9pm instead of 8.  The tears and gnashing of teeth, along with the brutal wars about why tights can’t be worn as pants and why, just because a pair of pants and a shirt are both blue, it doesn’t mean they match at all are tales that should one day be included in epic poetry.

The key to avoiding all this (I think, at least, because it’s still Sunday) is to wear your kids out so badly that they can’t even stay awake long enough to argue that it’s still light out at 7pm.  Thankfully, today was simply gorgeous outside (unlike the usually PA Saturday in March).  After getting up on time (but really an hour early) for church, we took the kids out to lunch and grocery shopping, followed by several hours playing outside.  We ended the evening with a picnic outdoors (although by then there were some winter coats involved).  Our little guy was so tired that he passed out while nursing by 6:30!  We’re still working on the other kid, but I imagine she won’t be far behind.

Of course, it’s not tomorrow morning yet.  Maybe we’ll pick out outfits and make lunches before bedtime.  That way, I can dress her in her sleep and carry her to the car.  She should wake up just in time for the Pledge of Allegiance.  I better send a toothbrush with her, I guess.