Since almost anyone who reads this knows me personally, I probably do not have to announce that THIS post was a bit premature.

When I first began acknowledging the possibility that I might be pregnant, I decided I was probably overreacting.  I’m getting older and my body isn’t going to work like clockwork anymore.  As the days passed, it became harder to deny.  When I finally took the test and was faced with the reality that we were bringing another child into the world, I realized just how much I’d been in denial. 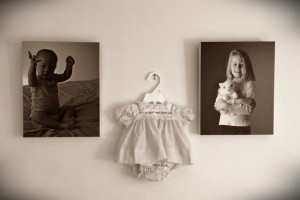 Once the initial shock and panic wore off, there were many things to consider.  Where will this new child sleep? Will our family fit in our car? How will we pay for two in day-care?

Surprisingly, I also felt irresponsible.  I am a highly-educated woman with a full understanding of how reproduction works.  How could this have happened? I mean, I know how it happened, but still…..  I’m such a control freak about everything – how could I have let this happen?

Once we reached the point when we were ready to tell people, I was shocked at how many of my friends – very intelligent, well-spoken women – confided in me that they too had been surprised by their third child.  There is a whole community of unexpected third babies out there I never knew about.

Jim expressed concerns about our third child one day knowing she (yes, it’s a girl) was not planned.  I completely understand why he feels this way.  No one wants to be an “oops” or considered a mistake, but I don’t see it that way.  She is not a mistake, she’s a surprise.  I suspect, although we had never envisioned our lives with her, once she’s here I imagine we will not be able to imagine our lives without her.