When my parents got married in the late 70s, they didn’t have much.  Fortunately, if you grow up on a farm, there’s likely to be a piece of land on it where you could build a house.  That was the plan all along, it just took some time to come to fruition.

My parents’ first house, the one I lived in until I was 6, was a used trailer left over from Hurricane Agnes. It had been a government-issued pre-fab home used as a dwelling by people who were displaced during the aftermath of the storm.  There was no insulation, so often in the winter our blankets would freeze to the walls in the middle of the night.  It was small, especially once we became a family of four, but my brother and I never minded.  We were little and it was plenty for us.

It took my father years to build an actual house all by himself.  Once he did, though, it was time to get rid of the trailer.  Conveniently, there was a nearby couple just starting out that needed something to live in until they were able to build their own house.  So, our house was handed down to them. 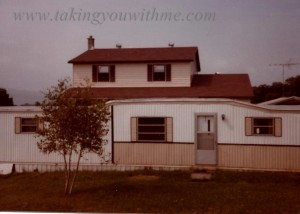 The trailer, in front of the new house

The moving day was one of the most exciting days I remember from those early years.  I can’t believe they pulled it off.  Basically, with help from both families, they towed our house away with a tractor and placed it on the property of the new owners.  The roads by us were hilly and curvy, and I think they almost took out a bus shelter.  Eventually, the trailer made it to its destination and served its purpose once again. 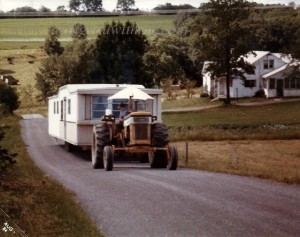 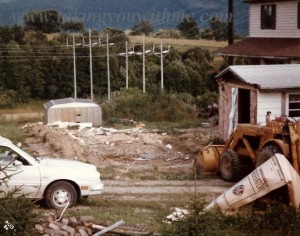 What was left when it was gone (this later became our driveway).