Last year, she played Tee-ball and she enjoyed it. Of course, it’s hard to be terrible at Tee-ball and many of her friends from school were on her team, so it was easy to enjoy.

Because she is freakishly tall for her age, this year we figured it was a good idea to move her up to the coach-pitch level of our local Little League organization. Looking back, that was probably a mistake.

Shortly into this year’s season, she quickly surmised that she was the worst player on the team (which was true). None of her friends from last year were on her team and there was only one other girl. Jim and I didn’t care that she was terrible as long as she tried her best. 6yo, on the other hand quickly decided that she didn’t want to put time into something she wasn’t automatically good at – a character trait I’m not sure how to overcome. 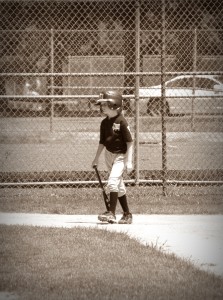 Needless to say, it was a tortuously, long season. Every few nights, before each game, I would put on my happiest face and remind her that she doesn’t have to be good at baseball, she just has to do her best and have fun. This would be followed by whining on her part, which I would answer by reminding her she’s not allowed to quit until the season is over. When she was particularly reluctant to go, I would have to threaten that she couldn’t have ice cream after the game if she didn’t try her best. Nothing holds sway over 6yo like threatening to take away her ice cream. 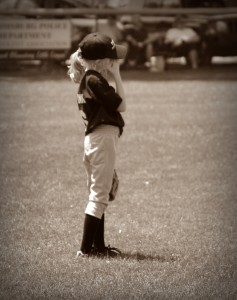 Team sports are a valuable part of growing up. I’m hoping she’ll find another sport in the future more suited to her skills and likes, but until then we’ll just keep taking her to dance classes. There, she shines and sparkles.