Barbie Dolls.  I had them.  Lots of them.

My father built me a beautiful doll house for my Barbies, which my mother painted, wall-papered, and furnished.  It was lovely and I spent hours playing with them.  (I don’t actually want my daughter to play with Barbies, but I’ll cover that in another post.)

There were three things that I loved to do with my Barbies:

Stage them in various scenes from my favorite Broadway musicals.  This was difficult because I only had two Ken Dolls.  Sometimes G.I. Joe had to stand in as Curly in Oklahoma.  When re-enacting Into the Woods, Brunette Ken played the Baker, Cinderella’s Prince, and the Wolf, while Blonde Ken covered the parts of Jack, Rapunzel’s Prince, and the Narrator.  I think, for Les Miserables, I may have also had to “borrow” some Transformers from my brother for a rousing Mattel rendition of “One Day More.” 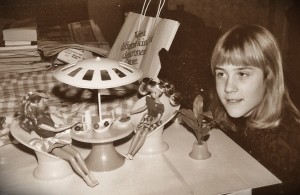 Me, with the “Ladies who Lunch”

Murder them.  Ok, so maybe playing happy housewife did not appeal to me.  Having Barbie stand in the kitchen or take a nap in the upstairs bedroom of her dream house was boring.  Instead, one of my Barbies would pretend to befriend my favorite Barbie (a redhead whose name was actually Midge) then betray her in some way.  Perhaps she would steal Midge’s jewels or kiss Brunette Ken when Midge wasn’t watching.  Midge would respond by first beating the crap out of Barbie, then finishing her off by stabbing her, running her over with her car, or shoving her off a cliff (i.e. my bed).  Sometimes I even smeared them with lipstick so they’d look all bloody.  Midge killed so many blonde Barbies that I’m sure she qualified as a serial killer.  I blame this on my father, who didn’t see it necessary to censor any of his television watching that he did in our playroom (because that’s where the recliner was).

Launch Them.  My brother and I are not particularly close, but if there’s any memory we can bond over it’s this one.  After knocking off too many Blond Barbies, Midge got her comeuppance when, one fateful day, my dog chewed off her foot.  She was no longer attractive to me as the femme fatale, so instead my brother and I took some yarn from our mother’s craft drawer, tied it around her neck, swung her in a big circle off our second-story deck and let her fly.  Because he was younger, it was his job to retrieve her from whatever field she landed in.  We learned that she would fly farther when she was naked and that, if you whipped the yarn too violently, her head would pop off and it would take you several minutes to figure out where it landed.

If I ever decide to see a therapist, perhaps I should mention my Barbie playing habits. It may reveal a lot about me.  On second thought….