The other day, I was talking with a friend who has a toddler and I shared with him this parenting trick that has worked for all my children when it comes to nap-time.

Whenever my kids have reached a certain age, they have all insisted they no longer need naps – even when it’s obvious they still do. I’m sure they are not unique in this, but it makes for a very frustrating parenting stage. For my oldest, just saying the word “nap” would elicit whining and crying that would make you think she was headed to the doctor for shots. She slept more than the other two ever did, but she always insisted she was not tired. 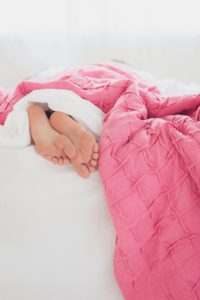 One day, on the way home from a morning activity, I was mentally preparing her for the idea that she was going to take a nap after lunch and she was predictably insisting she did not need one. That’s when I came up with the “Lie-down.”  I probably should have come up with a better name, but as long as it wasn’t a “nap” she was on board.

The most torturous thing about naps for my daughter was the perceived infinity of naptime. The waiting to fall asleep seemed like a lifetime – a toddler purgatory. She would have to stay in bed until she fell asleep, then she could get up after she napped, but that all seemed so vague to her. Because she likes order, routine, and certainty, I made her a deal:

“You do not have to nap today, but you have to lie down in your bed. I’m going to turn on your sleepy music. If you are still awake when the music ends, you may get up.”

She wasn’t entirely convinced, but the idea of it not being a nap was attractive. Knowing there was a definite ending also appealed to her. After lunch, she crawled into bed with little fuss and I started her CD. Before it ended, she was asleep and stayed that way for a few hours. It worked!

I know my kids well enough to know that, if they don’t fall asleep within 45 minutes, they aren’t falling asleep. A 45 minute CD was just enough time to let her rest and relax. After that, if she didn’t fall asleep, I could at least be assured she had rested and relaxed for 45 minutes, which is better than nothing.

Since, that day, I have used this method with all my kids. The younger two did not listen to music when they went to bed, so instead we just used the digital clocks in their rooms. At two, they didn’t really understand time, but they knew their numbers. I would put them down shortly after 1:00pm and tell them they couldn’t get up again until the first number was a 2. Sometimes, if my 7yo is particularly cranky on a weekend, I will still use this method and he falls asleep almost every time.

We are almost out of the nap-time stage for good in our house. The “Lie-Down” has served us well. I hope you find it useful. Maybe you can also come up with a better name!