(For those of you dwelling in caves: spoilers ahead!)

Like millions of people around the world, Jim and I are anxiously awaiting the return of Game of Thrones for it’s final (and shortest) season. We already have plans with friends to get together every week to see if Jon Snow (aka Aegon Targaryen) is actually Azor Ahai.

(I would also like to point out here that Aegon, Targaryen, Azor, and Ahai are all accepted words in Google Docs, and Google knew that I actually meant “Jon” and not “John” as I originally typed. So creepy.)

In preparation, Jim has decided to re-watch all seven existing seasons. This is where I bow out.

Don’t get me wrong, I love GOT. But I also can’t stand it. Even when I know something is coming (because I looked it up online ahead of time to appease my anxiety) I still can barely stand to watch it. We were one season late coming to the party, so I had already heard that Ned Stark, the apparent hero of season 1, gets beheaded during the penultimate episode.  That didn’t get to me. The first actual warning I got that GOT may be too much for my sensibilities was when Cersei Lannister sent soldiers to Littlefinger’s brothel to stab bastard Baratheon babies. That sword sliced through a pretend baby and I was like, “Nope, I’m outa here!” 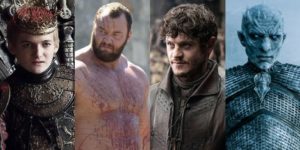 I was so intrigued by the story, however, that I came back. Every time the show passed my emotional limit, I still came back. The Red Wedding, the killing of direwolves, the burning of Shireen Baratheon, and even the death of Hodor ripped me apart. And yet, I came back.

What I won’t do, however, is watch it all again. I will not submit myself to four seasons of King Joffrey or Ramsey Bolton again. I will not watch half of my favorite characters die again. As satisfying as it would be to watch Daenerys (also in the autocorrect, btw) walk through fire not once, but twice, I think I’ll just look those scenes up on YouTube.

More power to Jim if he can spend two days, 15 hours, and 30 minutes watching the whole thing again. I’ll be there for the season premiere in April, watching through my fingers with a nice glass of wine. Until then, no thank you.