Yesterday, I discovered a parenting hack that worked so well I thought I would share it. You may have already done this yourself, but I had never thought of it, so I’m sure there is someone else out there who could find this to be useful.

We have a big, finished room in our basement where our two younger kids keep many of their toys. This room is often anxiety-inducing, as my littles have the typical childhood habit of leaving all their toys on the floor. Fortunately, the mess is hidden in the basement most of the time. The difficulty comes when I decide it is finally time for them to clean it up.

If I send them downstairs with the command to put away their toys, one or more of the following ALWAYS happens:

Yesterday was a snow day with lots of sleet, so we were stuck inside. Again, I told them to go pick up their toys, and more than one of the above scenarios began to play out. I was preoccupied with an organizing task of my own and I didn’t want to stop to go supervise their cleaning.

Suddenly, inspiration hit and I had an idea. I gave these instructions:

“James, you pick ONE thing that Harper has to put away. Then, Harper, you get to pick one thing James has to put away. It can be ANY toy that isn’t where it belongs and you can’t argue. Just put it away.”

And it worked. In less time than normal, all the toys were off the floor and no one was fighting.

This was successful for a few reasons:

Before, I would have stood in the room and done the exact same thing: “Harper, put away that princess doll. James, put away this nerf gun.” This simple adaptation kept their cleaning task the same, but allowed me to step out of the equation. It also broke down the steps of having to 1) identify the misplaced object and 2) put it wear it belongs. Instead, they only had to do half of the process at once, so they never got overwhelmed. 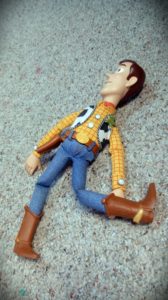 It may not work for everyone, but I will definitely be using this method in the future. I may even look for ways to use it to accomplish other difficult parenting tasks.

Do you have a useful tip for cleaning with your kids? If so, share it in the comments!