It’s been a few years since this post, and since then we’ve grown into avid pop-up campers. Our little 1996 Palomino served us well, but this year we were able to upgrade to a slightly-less-old  2002 Coleman Carmel. We weren’t looking to upgrade to another pop-up (we have our sights set on larger, loftier travel trailers) but an amazingly priced opportunity presented itself so we went for it. Since we were also able to unload our old trailer for a decent price, the whole process ended up costing very little. 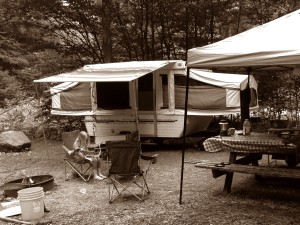 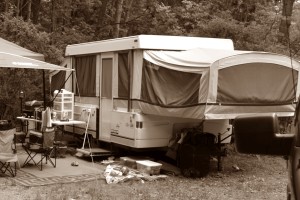 Most pop-up campers are designed to sleep up to 6 people, but that would be really crowded. Fortunately, we only have 5. We’ve managed to make camping work for us in our little pop-up while still affording ourselves the luxuries we like to include in our “glamping” experiences.

Sometimes it amazes me that we can all sleep on the same small place and not keep each other up all night. Maybe it’s the fresh air, but our kids usually sleep better when we’re camping than they do at home. Here’s how we do it:

9yo and 4yo both sleep on the double-sized bed. I was worried they would pick at each other all night or wake each other in the early morning. To avoid conflict, we decided to have them sleep in sleeping bags on top of a comforter. This works well for two reasons: 1) they aren’t sharing bedding so there’s no fighting over blankets and 2) we can have them sleep facing opposite directions so it appears as though they each have their own end. This has worked really well and has elicited no complaints from either of them. We’ve found it’s best to put 4yo to bed first and have 9yo sneak into bed once he’s asleep. 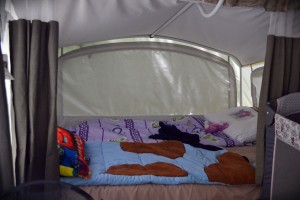 1yo is still sleeping in a crib at home, so we need to use the pack-n-play whenever we travel. The only place to put it is on the dinette bed. When 4yo was an infant, we tried putting it in the bunk end but it was far too hard to lift him in and out from that height.  1yo sleeps really well in the pack-n-play as long as we put her to bed before the other two. To keep cool breezes and light to a minimum, we attach blankets to the exposed sides. One day I may make cute curtains for the sides, but if I wait long enough she’ll be sleeping in a bed and I won’t need to. 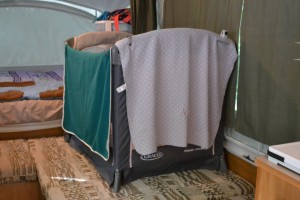 If the morning is cold or rainy, it takes 30 seconds to lift the pack-n-play onto the older kids’ bed and assemble the dinette for breakfast, puzzles, or a competitive game of UNO. 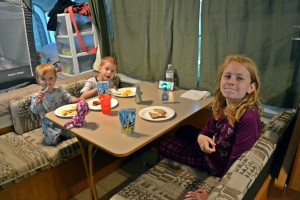 Our bed is easy. We topped it with a memory foam mattress pad because all camper mattresses were made by the Flinstones.  Then, I simply make the bed like I would anywhere else. We have no complaints.

There’s no more work getting our beds ready in the camper than there would be in a tent. Maybe even less, since we don’t have to blow them up first!

We’ve already camped twice this summer and we have another trip planned in a couple weeks. It’s become a wonderful way to make memories with our children. 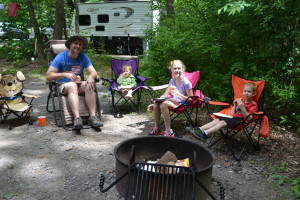