Now that the baby is mobile, she’s really enjoying playing with her toys. She loves things with knobs and buttons and she likes to drum on flat objects with anything slightly resembling a stick.  She has also tasted all of the tools in 3yo’s tool bench.  Interestingly, she has two favorite toys: a green plastic car that she drives everywhere and an army of giant plastic insects that originally belonged to her brother.

The car thing is cute.  She pushes it along the floor, the fireplace mantel, and the coffee table.  The bugs are not cute.  In fact, they’re kind of terrifying. 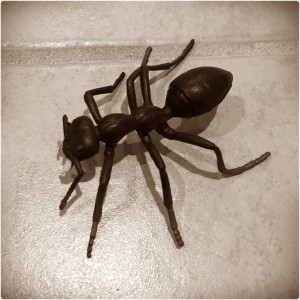 I like to think of myself as a pretty brave person. I’m not cancer-fighting brave, or join-the-armed-forces brave, but when it comes to common fears (the dark, heights, snakes) I don’t have many. Insects, however, are my one unreasonable fear. Our house has often echoed with the sounds of my shrieks, brought on by giant hairy spiders or miles-long house centipedes that don’t understand they are not allowed inside. I’ll admit that they often don’t survive our encounters. Yes, I know that they’re more scared of me, they eat other bugs, blah, blah, blah. In the moment, as they crawl out from under the wet towel I just picked up off the laundry room floor, all I can see is a descendant of Shelob ready to wrap me in its web and drain me of my blood. If Jim sees a plastic cup upside down on the floor, he knows there’s a good chance I left a spider under there for him to handle. 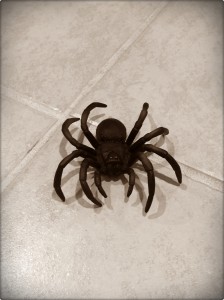 So what does the baby do? She leaves these giant, plastic, very realistic-looking bugs ALL OVER my house.  I turn the corner, and there’s the spider of my nightmares.  I bend down to pick up another toy, and beneath it is a scorpion, ready to attack.  More than I’d like to admit, I have screamed in surprise at these small plastic objects.  I’ve freaked out after stepping on them in a sleepy daze as I wander to the end of the house for a midnight nursing session. Today, there was one in the refrigerator. 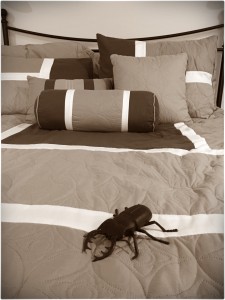 I kind of love that her favorite toys are so gross and not traditionally “girly.” I just wish they didn’t look like my worst nightmares.