Recently, 6yo became 7yo.

Because weekdays are bad for everybody, her birthday party was held on a Sunday.  It was a small affair with family and a few close friends.  No theme, just some cute $.97 disposable table cloths, a few balloons, and cake that 7yo specifically designed herself. We barbequed some chicken and ate fresh-picked sweet corn.  Nothing big, nothing expensive. 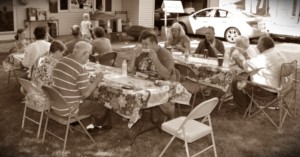 Last year, when she turned 6, the birthday production was much bigger.  The Saturday before her birthday, there were two parties.  The first was a kid’s pirate themed party, complete with crafts, a scavenger hunt, a pirate-ship cake, and a giant pile of presents. I had ordered every pirate decoration offered from Oriental Trading.  Kids left with eye-patches, telescopes, plastic gold doubloons, head scarves, candy, and a treasure chest they designed themselves. Once the under-10 crowd dispersed, we were joined by family and a few close friends for a second, more low-key party (and a second cake).  On the actual day of her birthday, Jim and I took her downtown to celebrate with dinner at the restaurant of her choosing and stops in all of her favorite local shops followed by desert in her favorite ice cream parlor.

At the end of 2012, when I was working to organize our photos for the year, it became apparent to me that we may have gone overboard.  So, this year, we decided to scale it down a bit.  As I was putting the tablecloths on the folding tables in our yard, I second-guessed myself for a moment – would it be enough?  Will she be upset that this year’s festivities don’t compare to last year’s?

Of course she wasn’t.

Not once did she say “aren’t more kids coming?” or “why aren’t there games and prizes?”  She thought her birthday party was perfect.