This morning, I’m thinking of a dear friend.  I’m reminded of her because we’re nearing the second week of August.

For years, while I was in high school and college, I would spend the second week of August on vacation at Treasure Lake.  Treasure Lake is a golf community with two highly-rated golf courses that also offers boating, swimming, and many other fun summer activities.

I originally began going as a helper to my Aunt (my father’s sister) and Uncle.  They had young children and I spent several of my summers babysitting them.  At the end of each summer my Aunt and Uncle would generously bring me along on vacation so that they could both enjoy some rounds of golf together.  I would take the kids for bike rides, to the beach, and to the pool while the adults played their 18 holes.  My relatives covered all of my expenses and the kids were a dream to babysit.  I was basically being paid to go on vacation.

We were joined every year by another couple, Shirley and Wayne.  Technically, Shirley was my uncle’s aunt, but they were so close in age she seemed more like a cousin.  Still, all the kids (including me) referred to her as “Aunt Shirley.”  She was kind, generous, and a great deal of fun.

After a few years, I stopped babysitting, but I was still invited to come along simply as a family member.  I was often invited to join them for their daily rounds of golf.  My Aunt, Shirley, and I would golf together while the guys (who took their scores very seriously) went on ahead.  Our team motto was “Hit it toward the cart path!”  Shirley was actually a very skilled, avid golfer.  She taught me everything I know about golfing (which, admittedly isn’t much).  I always golfed better when I was with her.  Her most important advice was repeated to me year after year in a sort-of mantra she had learned from a golf instructor once-upon-a-time:

“Keep your head down.

Keep your head down.

Keep your God-damned head down!”

Outside of our vacations, I didn’t see Shirley and Wayne that often.  I would attend picnics at their house and run into them at some family functions. They both danced at my wedding.  Still, there’s a familiarity that develops when you spend a week with people year-after-year – a bond akin to those one develops at summer camp. I considered Shirley and Wayne to be good friends and was extremely fond of them. 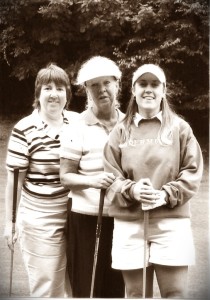 My Aunt, Shirley (center), and myself during a round of golf.

A few years ago, Shirley succumbed to cancer at an unfairly young age.  She left a gaping hole behind in the community and in the hearts of her loved ones.  Her funeral was beautiful, yet terribly painful.  She was a nurturer, a leader, and a doer.  She is fondly remembered by all who knew her and her memory continues to live on in her friends and family.

Often, not just in golfing but also in everyday life, I can still hear her voice telling me to “Keep your head down!” and simply trust that, if I do what I’m supposed to, things will go the way they should.

We miss you, Shirley.