I love rocks. Who doesn’t?

Other than that, rocks are awesome.  After all, the wise man built his house upon the rocks. If he was really wise he would’ve built his house on Boulder Field because those rocks have been there for 20,000 years. But he didn’t, so the government took it over and turned it into a tourist attraction. 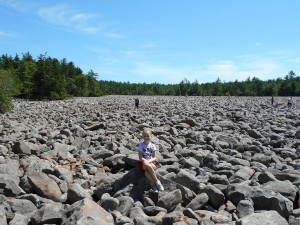 There’s some story about how glacial melt caused rocks to break and somehow magically end up there, but I choose to believe that there’s really an Asgard ship (Stargate, not Marvel) hidden beneath the 12 feet of rocks.  One day, when we need it, those little gray geniuses will send us a code to turn it on and Richard Dean Anderson will fly it out of the ground with his mind.

Until then, tourists will skip from rock to rock (some more gracefully than others) and write stupid stuff on them, like “I love Betty” and “Shane rocks!”  By the way, very funny, Shane (who writes his name with an S shaped like a lightning bolt).  How clever of you to demonstrate your understanding of homonyms on a 700 pound rock that was just minding it’s own business.