After waiting months for one nice day here in NEPA, we’ve finally been blessed with a few days in the 70s.  Because of the particularly long wait, people have been desperate to get outside, and it shows.  I live in a university town, so there has been the annual parade of short shorts with tank-tops (still April, people). Gusty winds have been blowing frat boys’ shirts off all week.  The poor guys have been forced to play Frisbee in the park with only their shorts on (bummer, I know).  Zombies must also be on the increase, because people are running everywhere.  Really.  Every time I drive somewhere, I have to dodge several potential future zombies.  I’m pretty sure I could out-walk a zombie without breaking too much of a sweat (unless it’s one of those Resident Evil zombies who can run), but people are probably just trying to get a good head start so they can stop and pick up some extra pick axes at the hardware store.

As I was driving past the park yesterday, I spotted a young man and woman near a bench.  The young woman was looking wistfully to her right.  At least, I’m assuming she was wistful.  She was wearing sunglasses, so it’s hard to be sure.  The young man was taking her picture with his phone.  I’m guessing her intentions were to get a picture of herself enjoying the nice weather at the park for Facebook, Twitter, Instagram, or whatever because they were both being still for longer than a candid photo reasonably would have taken.  There was definite thought going into this picture.  The fact that she was posing as though she wasn’t posing didn’t struck me as unusual, but seeing it from my car did cause me to think about how odd it is that people do that.

I tend to think of non-professional photos as images captured from real life: someone blowing out a birthday cake, a child running to first base, a baby trying to eat his feet.  Group pictures, although intentionally set up, are meant to look that way so that you can see a picture of yourself with your cousins years from now. With the advent of social media, however, it seems that more and more people (myself included) are almost creating a second life with our pictures – one of images we wish had happened naturally.  Our social media lives are becoming an embellishment of the ones we actually live.  There is a difference between a boyfriend snapping a picture of his girlfriend gazing at the river and a girl posing like she’s gazing at the river for a picture.  She didn’t live that moment, they created it.  How much of what we put out there for others to see is not our real lives, but our lives as we’ve created them in photo?   Furthermore, what does it say about us that we don’t think pictures of our real lives are interesting enough to be shared with others?

I often read or hear (and sometimes espouse) annoyance at the birth of the “selfie” – shots people take of themselves with their phones to post on social media.  At least, with a selfie, people are being upfront: “this is me, taking a picture of myself, so you can look at it.” 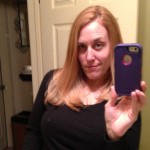 There seems to be something sadder about a picture that says: “I’m posing like this so that you think this is how I spend my time naturally, even though I’ve been looking around this tree trunk at nothing for thirty seconds and I’m sucking in my stomach.  Also, I live in Sepiaworld.”

To prove my point, here are some shots of me that are totally candid and NOT AT ALL set up.  This is my real life, baby: 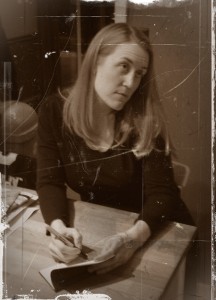 Me, writing a check

Me, taking out the trash 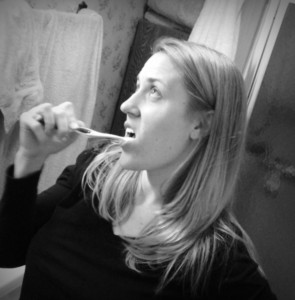 Me, brushing my teeth

1 thought on “Selfies, Candids, and Zombies”