People chewing with their mouths open are like nails on a chalkboard to me.

I’ve been with grown, professional, educated people who can’t eat without making a gross spectacle of themselves.

So, I guess it shouldn’t be surprising that I just don’t understand gum chewing.  I know some people use it as stress relief or to satiate a desire to chew while they are trying to cut down on their eating.  Otherwise, chewing for the sake of chewing seems a strange habit to me. 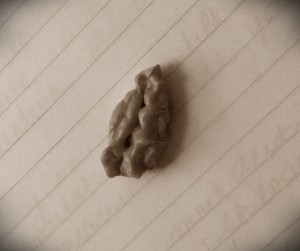 I don’t allow gum chewing in my classroom – not because it’s against the rules (and it is) – but because I lead fifty students or more in singing at once and I don’t know the Heimlich maneuver.  Outside of rehearsals, I tend to ignore the subtle, closed-mouth gum chewers.  As a teacher, I’ve more important fish to fry.  But, so help me, if a student sits there doing an impression of a cow chewing her cud while I’m trying to teach……It’s so distracting that I must do something about it.

I’ve reached the point in my career that I can be carrying on a class activity, spot a student smacking away, walk over to the garbage can, carry the can over to the student who is chomping  obliviously, hold it out to catch the gum as they spit it out and put the can back in its place without taking so little as a pause in the lesson.  Today, however, something happened that completely stopped me in my tracks.

It was near the end of class when I heard a really loud POP!  I looked in the direction of the sound and saw a red-faced girl covering her mouth.  It was the loudest gum pop I’ve heard in a long time and, while I was impressed, I still told her to spit it out.  She made no objections, but the girl next to her whined, “aaawww….that’s not fair!  She’s been working on that piece the whole weekend!”

People outside of Roald Dahl books actually do that?

“Where on earth do you keep it?” I asked with shock.

“I just put it back in the container.” She said, nonchalantly.

The remaining few minutes of class were spent discussing bacteria growth and the dangers of chewing used bubble gum.

Surprisingly, a 5-minute Google search did not reveal a study backing up my disgust.  I did, however, find an ad on Ebay selling Brittany Spears’s used chewing gum.

3 thoughts on “I Shouldn’t Have to Watch You Chew”