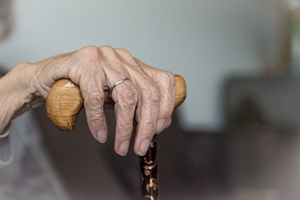 The other day, I was scrolling through my facebook feed and saw a warning posted about a search for someone who had attacked an “elderly woman.”

I thought to myself, “How terrible!? Who would attack someone so vulnerable?”

Obviously an attack on anyone is deplorable regardless of the person’s age, but imagine my surprise when I read further through the post to see the woman’s age listed as (wait for it)……

I remember being young and thinking 30 was old and 40 was even older. Now that I’m in my 40s, obviously I have a different perspective. However, at any age, the word “elderly” has always conjured thoughts of people in their late 70s, 80s, and 90s – people in the twilight years of their lives. In this day and age, 50 still seems middle aged to me.

Either way, I’m only 15 years from being “elderly” according to her standards and I have no intentions of feeling like it when I get there.

PS – My thoughts and prayers are with the woman who was assaulted and I hope her attacker is brought to justice.