Ok, well, not a snake.  A rock.  You know that feeling when you’ve gotten a pebble stuck into the tread of your shoe, so it makes you feel like your legs are two different lengths and you have to stop and pull it out because it’s like the princess and the pea, except for with shoes?

This was not like that.  This rock was the size of a medium brownie:

Apparently, when I got out of the car at the bus stop to pick up my girl, this monstrosity got wedged in between the heel and toe of my boot (pictured here, sans rock): 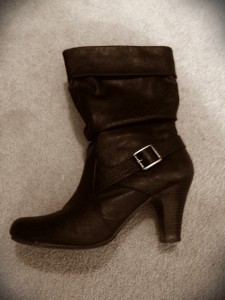 I managed to drive home, unload groceries, put them away, hug the little man, and use the bathroom without even noticing the rock.  It wasn’t until I sat down to unzip my boot that I noticed an extra part of my boot I didn’t recognize.  For a moment, I had no idea what it was.  Once I realized it was a rock the size of Rhode Island, I immediately decided to leave it there to show Jim, at which point it promptly unlocked itself (of course).

It’s a good thing I saved it and documented it with photos, because Jim never believes the minor details of any of my stories.  Apparently, I am an exaggerator and it runs in my family.  He says whenever I give a number to describe something that happens he mentally cuts it in half to get a better idea of the actual measurement. If I say I waited two hours, he knows it was only one.  If I say a speeding car was going 90, he cuts it back to at least 50. On the other hand, if I say I ate two slices of pizza, he automatically bumps it up to 3.  If my brother is telling the story, he cuts the total measurement down to about 30%.

His exaggeration conversion formula was absolutely unnecessary in this instance however, because I saved the rock to show him.  He was duly impressed.